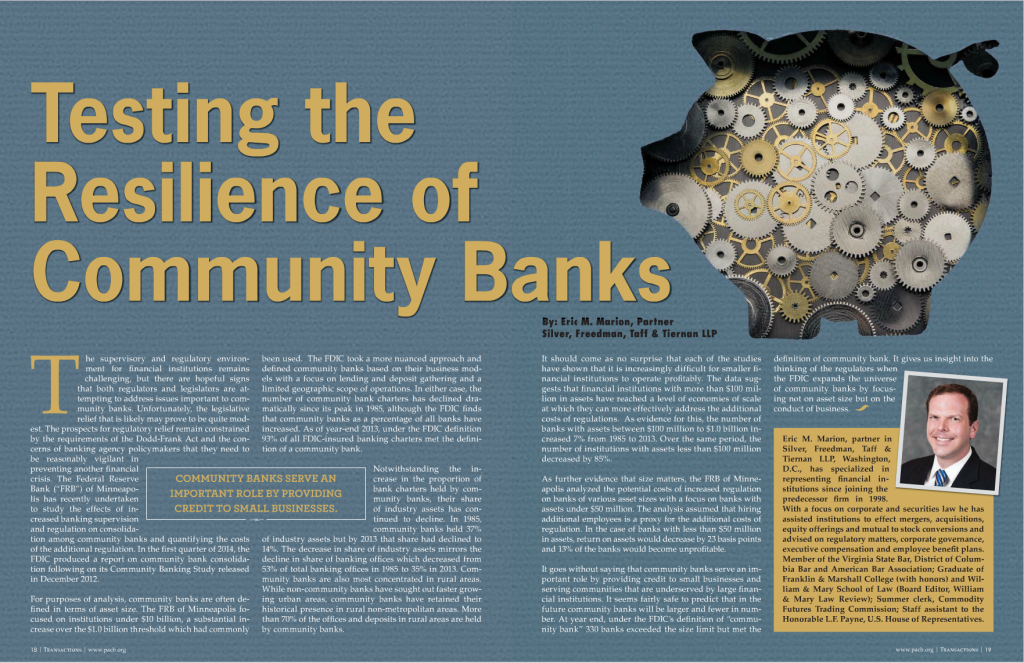 As Published by the Pennsylvania Association of Community Bankers, September 2014
(view the issue)

The supervisory and regulatory environment for financial institutions remains challenging, but there are hopeful signs that both regulators and legislators are attempting to address issues important to community banks. Unfortunately, the legislative relief that is likely may prove to be quite modest.The prospects for regulatory relief remain constrained by the requirements of the Dodd-Frank Act and the concerns of banking agency policymakers that they need to be reasonably vigilant in preventing another financial crisis. The Federal Reserve Bank (“FRB”) of Minneapolis has recently undertaken to study the effects of increased banking supervision and regulation on consolidation among community banks and quantifying the costs of the additional regulation. In the first quarter of 2014, the FDIC produced a report on community bank consolidation following on its Community Banking Study released in December 2012.

It should come as no surprise that each of the studies have shown that it is increasingly difficult for smaller financial institutions to operate profitably. The data suggests that financial institutions with more than $100 million in assets have reached a level of economies of scale at which they can more effectively address the additional costs of regulations. As evidence for this, the number of banks with assets between $100 million to $1.0 billion increased 7% from 1985 to 2013. Over the same period, the number of institutions with assets less than $100 million decreased by 85%.

As further evidence that size matters, the FRB of Minneapolis analyzed the potential costs of increased regulation on banks of various asset sizes with a focus on banks with assets under $50 million. The analysis assumed that hiring additional employees is a proxy for the additional costs of regulation. In the case of banks with less than $50 million in assets, return on assets would decrease by 23 basis points and 13% of the banks would become unprofitable.

It goes without saying that community banks serve an important role by providing credit to small businesses and serving communities that are underserved by large financial institutions. It seems fairly safe to predict that in the future community banks will be larger and fewer in number. At year end, under the FDIC’s definition of “community bank” 330 banks exceeded the size limit but met the Definition of community bank. It gives us insight into the thinking of the regulators when the FDIC expands the universe of community banks by focusing not on asset size but on the conduct of business.